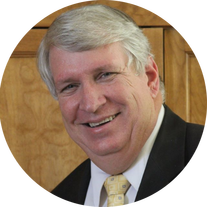 Jim Waite is the youngest of the four children born to Erwin & Colleen Waite. He has always had an interest in writing, even at a very young age as he would write stories, reports and poems. Later, in high school, he worked as a sports reporter for the local newspaper, the Bakersfield Californian. In 1984, he graduated from Brigham Young University, with a BA in International Relations. He has worked as a financial planner, with his own company, JL Waite Financial Group, since 1996. He married Lisa Wilson in 1982. They have ten children and three grandsons. In addition to writing, Jim enjoys reading, sports, and learning new things through travel.
While most eight-year-old kids were out playing, little Jim Waite was busy writing reports and stories about dinosaurs and U.S. Presidents – an odd combination, unless you consider how an eight-year-old might view presidents (bigger than life and very, very old). Jim has always had an interest in Dr. Seuss, reading dozens of his books growing up. You might spot the influence in his debut children’s book, Better than Best, which follows a similar style while teaching important values. After all, there are always times when we need a little extra encouragement to realize our full potential. To do so, we need to feel that we’re not only good, but even Better than Best.